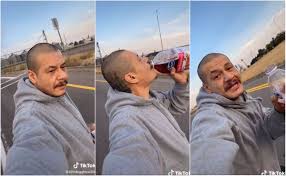 By now, you’ve probably already seen the viral video of the guy skateboarding, filming a TikTok, drinking cranberry juice straight from the bottle and singing along to Fleetwood Mac‘s ‘Dreams‘, right? Oh, you haven’t seen the video yet? Let me introduce you to what everyone is calling ‘cholo skateboarding while listening to Fleetwood Mac while drinking cranberry juice’.

And, if you’re visiting this page no doubt you’re looking for this song as a ringtone for your phone.  You’ve come to the right place!

Here’s a clip of the song in the video:

The instant I heard his say this I thought it would make a killer ringtone.  But, I searched everywhere for it.  I thought I could get it from the Apple iTunes ringtone store, but all they have is some crappy remake version.  I wanted the real deal for my ringtone, so I made one and I’ve decided to share it with you…