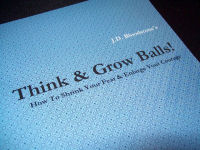 I finished writing Think & Grow Balls! in December of 2007.  The book had been churning in me for years before I actually set down to write everything out.  During my writing, I realized I was suggesting some pretty deep ideas.  Not feeling comfortable with what was in the book I set out to interview as many people as I could to bounce my ideas off of them.  I spent six months conducting field research, meeting and talking to new people, making great friends and solidifying my ideas which later become the final version of my book.  I think my book connects with so many people because my ideas were boiled down to the concepts that bind all of us together.  By the time I had the book ready to submit to my publisher, I had a list of hundreds of people that wanted an advance copy of it.  I knew I had written something good!

The book was written but it didn’t have a title.  I wanted it to be catchy.  The name for my book, Think & Grow Balls!, came to me during a late night nap in between writing sessions for another project I was working on – a companion book called How To Find Yourself – which was only available during 2008 and may be released on this blog soon.  As you can guess, the title was heavily influenced by Napoleon Hill’s amazing book, Think & Grow Rich (click to download free digital copy of the first edition).

The subtitle, How To Shrink Your Fear & Enlarge Your Courage came to me soon after.  It came to me in contempt of the aggressive marketing techniques used by a company to push male-enhancement pills to the insecure male population.  I’m sure you’ve seen the commercials.  (Hint: the guy with the cheesy smile, the whistling, and the color blue everywhere.)  I really felt like the company was taking advantage of men by exploiting a common and huge weakness: the urge to be bigger, and thus better, than other men.  (I later found out that the company was sued for some large sum of money and banned from using the marketing techniques in the future.  I don’t see the commercials and I don’t hear about the company anymore so I guess the lawsuit put them out of business.  Good riddance.)  The title was finished and made people smile every time they heard it so I went with it.  I registered my domain name, wrote a small ad,  uploaded it to my website, and the rest is history.

Then the feedback came in.  I had readers who liked my book so much they were printing out copies of my book (it was originally an e-book in digital format only) and giving it to their friends.  (Some of them actually wrote me and sent me money via PayPal for the additional copies they made!  Bless your souls, you know who you are!)  E-mails flooded my inbox with feedback from people all over the world letting me know that my book had truly helped them.  Still to this day, when I hear from someone who was helped by my book, it makes me feel better and more alive than I ever do in my life.  I should be the one thanking them when I think about it.

From day one I told everyone that if they bought my book and didn’t like it I would personally send them their money back.  After three and a half years, I’m proud to say that no one has ever taken me up on the offer.  So, what are you waiting for?  You can get started by downloading and reading the preview chapters.  I bet you’ll like them!

Guy Skateboarding to Fleetwood Mac’s ‘Dreams’ While Drinking Cranberry Juice Has a Ringtone!